The World Cannot Allow a Madman to Obtain Nuclear Weapons

Editor’s Note: Mr. Jong-Un is the leader of the Democratic People’s Republic of Korea (North Korea).  Mr. Jong-Un’s views do not necessarily reflect those of the Mountain-Ear.

Since the dawn of the nuclear age, nations have worked together to stop the proliferation of nuclear weapons and prevent rogue states from obtaining them. The traditional rationale for nuclear weapons has been deterrence. The theory is that nations with nuclear weapons can use their nuclear threat to deter attacks, thereby preserving peace.

If you think about it, deterrence has worked pretty well since the end of World War II. There have been no worldwide wars since 1945. However, one scenario that now haunts the community of nations is that a madman will obtain nuclear weapons and launch a nuclear attack that could result in our planet’s destruction. A few months ago, your President Obama said, “There is no doubt that if these madmen ever got their hands on a nuclear bomb or nuclear material, they would certainly use it to kill as many innocent people as possible.”

Last week, MSNBC reported that your Republican presidential candidate, Donald Trump, recently asked a foreign policy expert advising him why the U.S. can’t use nuclear weapons. Such statements are of great concern to North Koreans and people around the world. What kind of madman thinks that way?

There is a great deal of other evidence suggesting that Mr. Trump suffers from serious mental illness. Making fun of a reporter with a disability. Ejecting a baby from a campaign rally. Calling a war hero like John McCain a loser. Joking about earning a Purple Heart. Bragging about the size of his penis on national TV. Calling for the assassination of Hillary Clinton even though he knows she could kill him just like she killed Vince Foster and tens of thousands of Bernie Sanders supporters. The man is simply not rational.

The United States has approximately 2,500 deployed nuclear weapons and another 2,600 in reserve, along with thousands of warheads in its inventory. It is the world’s most powerful nation. The thought of giving a madman like Donald Trump control of this arsenal is terrifying.

Therefore, although it pains me to say this, North Korea urges you to vote for Hillary Clinton. Especially if you live in a swing state. 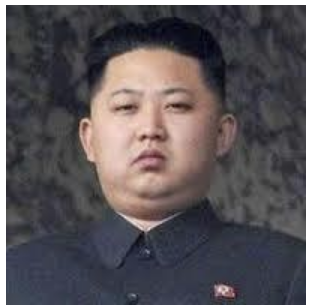