Early one morning in 1985 or 1986, while I was serving as a young Air Force legal officer, my pals and I were sitting around the lounge at the Base Legal Office at Offutt Air Force Base, drinking weak government coffee and talking sports. Parking on that side of the base was limited, and you had to arrive early if you wanted a decent parking space.

We were a group of young JAG officers, mostly captains, one first lieutenant, and one crusty old Senior Master Sergeant whose job was to oversee the enlisted staff.  We were talking about a young boxing phenom named Mike Tyson.  My back was to the entry.

Suddenly the Senior Master Sergeant stood and called the room to attention.  I’d been on active duty more than two years already and had never seen anything like that in the relaxed atmosphere of the Base Legal Office. And I thought, “Sergeant Longuil, I’m not falling for your bullshit at 7:00 a.m.”  But then my pals also stood and came to attention.  So, I turned around in my seat to see what was going on.

And there was the four-star general that commanded the Strategic Air Command, General John T. Chain.  And the full colonel who job it was to follow him around.  I stood, faced him, and came to attention.

Well, I guess General Chain figured my response was “good enough for a lawyer” because he said nothing. Unaware of the parking problem, he remarked about how good it was to see folks at work so early in the morning, then went on with the rest of his day.

As I look back on this incident, I think if you are going to give a man the power to destroy the world by deploying ten thousand nuclear weapons from missiles, bombers, and submarines, it’s probably good that he has the kind of personality that can let small stuff – like a young captain not standing quickly – go like water off a duck’s back.

PrevPreviousThe True Story of Snappy the Turtle and Trooper White
NextTaxation is Theft, and You is an IdiotNext 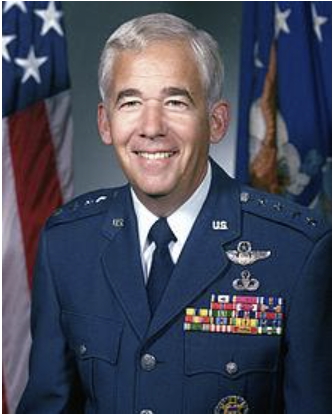