Taxation is Theft, and You is an Idiot

A popular libertarian slogan is “taxation is theft.” This may be one of the dumbest statements ever made.

One problem with language is that people sometimes misuse the verb to be.  People say, “The cat is white” when they really mean something like, “The cat has white fur.”  It’s harmless in that instance, but one popular form of argument is to think of something bad – theft – and equate it to something else you don’t like – taxation – using the word is.

Let’s break it down. Theft is when I take something from you without any legal right with the intent to permanently deprive you of it.  For example, Section 18-4-401 of the Colorado Revised Statutes, provides in relevant part, “A person commits theft when he or she knowingly obtains, retains, or exercises control over anything of value of another without authorization or by threat or deception…” (Emphasis added).  And before you get all pissy about the way I punctuated that, writing “(Emphasis added).” after a quotation, see the U.S. Supreme Court decision in Bob Jones University v. United States, 461 U.S. 574 (1983) where the U.S. Supreme Court did the same thing, with only that Rehnquist dissenting.

Taxation is when government requires you to pay money pursuant to the lawful authority granted to the government in the organizing document or laws passed by your elected representatives.

So, while “taxation is theft” is catchy and simple, it is logically wrong, as are many simple “X is Y” statements.

Instead of simply asserting that taxation is theft, I recently challenged some libertarians to define both terms and explain why taxation is theft.  One libertarian friend took me up, but he’s a smart man and he saw my point, then attempted to go around it by asserting, “Taxation is legalized theft,” which gives new meaning to the term theft because using that line of thinking there are two types of theft – legal and illegal.Taxation is when the government of the jurisdiction that you live in, whether you like it or not, requires you to pay money pursuant to the lawful authority granted to the government in the organizing document or by laws passed by your elected representatives.

But libertarians are not shouting, “Taxation islegalized theft,” they are shouting, “Taxation is theft.”  And, sadly, in an age where conservatives loath knowledge and science, simple phrases appeal to people that lack the time or desire to consider complex issues. That’s why I purposely used “You is an idiot” in this essay’s title – to illustrate what happens when we use is to equate unrelated concepts.  Of course, not everyone that proclaims “taxation is theft” is an idiot.  Libertarianism is one concept and idiocy is a separate concept.  That’s why we have different words for them.

Finally, note I did not assert “taxation is theft” is THE dumbest statement ever made. That would probably be something like, “Hey, I think we should take Ryan Leaf over Peyton Manning,” or “There is no difference between the two parties,” or “Roy Cohen is better looking than Mark Cohen.” 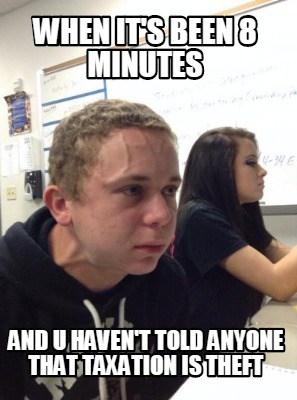